At DjangoCon my good friend Miguel Araujo and I presented on Advanced Django Form Usage. Slide 18 of that talk mentioned some made up statistics. Here they are for reference:

Important Disclaimer: These numbers were cooked out of thin air by yours truly. I determined them with zero research, they carry absolutely not scientific weight, and shouldn't be used in any serious argument. They are wholly my opinion, which is good or bad depending on your point of view and your own opinion of my opinions.

With that out of the way, I'm going to make a bar graph out of my fictional data:

You'll notice that my bar titles could be stronger. I actually did that on purpose in case anyone tries to use that chart in real life. In any case, if you thought that was interesting, then read on. I have many more made-up statistics. For example, here are more numbers I've cooked up:

Pydanny Made Up DevOps Statistics

[DevOps](https://en.wikipedia.org/wiki/DevOps) is the new hotness. I know because every other Python meetup features someone speaking on it - just like every other Ruby, Perl, and PHP meetup. Anyway... numbers:
This time, because I'm worried about the data being taken seriously, I've titled the bar chart in such a way that no one will reference it in anything important:

Pydanny Made Up Python Enviroment Statistics 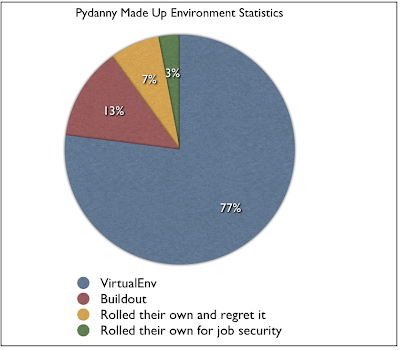 Pydanny Made Up Template Debate Statistics

The made up statistics in this post frequently touch on contentious topics. So let me add another controversial topic, this time the never ending template debate in Python:

The display for this data is a lovely pie chart as seen below. In order to make it appear more useful, I took out the part where people disagreed with me and also made it a 3-D pie chart. 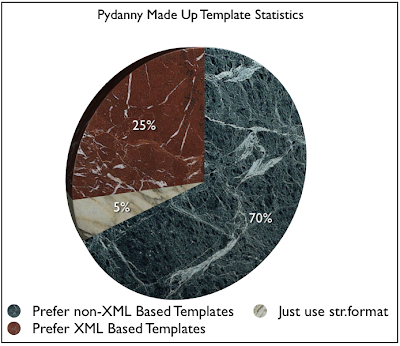 I sometimes get asked how to best optimize a Django site. My answer is 'cache and then cache some more' but there are those who disagree with me and start switching out Django internals before doing anything silly like looking at I/O.  My bet is this same thing happens with other frameworks such as [Pyramid](https://docs.pylonsproject.org/en/latest/docs/pyramid.html). 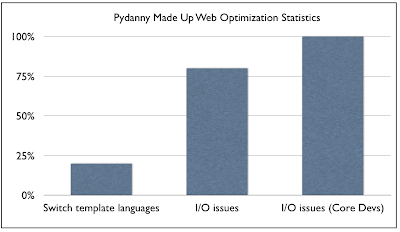 Of all the made up statistics in this blog post, I suspect this is the one closest to the truth of things.

Update: Alex Gaynor and Audrey Roy pointed out that the original line graph for this data was not appropriate. My weak defense was that I'm trying not to make things too serious but they stated that the line graph was so inappropriate it distracted from the rest of the post. Thanks for the advice!

Pydanny Made Up Framework Debate Statistics

Alright, let's conclude this article with some statistics I cooked up about frameworks in Python. I'm going to do more then just mention web frameworks, dabbling into other awesome things that the Python community has given us.
No chart? Getting this one to look meaningful was turning into a herculean effort. I invite others to render this data into something that look attractive and doesn't lose meaning. Come up with something impressive and I'll put it into a follow-up blog post.

57% of all statistics are made up on the spot.

Hilarious! Thanks, Danny — although I suspect that a far higher percentage get web.py and web2py confused than you have guessed. :)