Eulogy for My Father: Ted Greenfeld

Throughout most of my life, I never knew one of the defining characteristics of my father, Ted Greenfeld. It wasn't until 2013 when he was 78 years old that he revealed this side to me. Dad was visiting me and Audrey in California. It was then that Dad first shared his poetry with me. I had just published my first book. I think that encouraged him to open up about his creative side.

Dad's poetry was abstract and different, an experiment on his part to reduce the length of sentences yet maintain the ongoing context of the work. I found out later it was an experimental phase for him.

As I was reading a few poems, I felt Dad's words resonate deeply in my soul. That was a surprise to me, for I had never thought my father capable of reaching out to me in this way. Not knowing this side of my father, it was a novel experience.

Over the next few years, I learned that poetry was nothing new to Dad. I discovered he had started writing poetry when he was fifteen. And that there was more than poetry, there were stories and novel ideas.

Memories from my childhood began to emerge. I remember during my growing up years my father had yellow pads describing people, places, and events I didn’t know about. I never found the same notepad twice. At the time I didn’t think much of it. I know now it was his fiction, and my finding it was an accident.

I don't know why he kept his stories secret, but I can guess why. As a professional author, I know how hard it is to share your raw work. What it's like to put your heart on paper only to have people tear it apart.

Think about the spelling, grammar, and plots of your favorite books. They seem free of mistakes. That’s because what you are reading is a finished work, polished by editors who filed away the rough edges of the raw work. For my father, who never had a professional editor, his work would have seemed ungainly when the truth is it was merely unpolished.

So in 2017, I published a book of poetry authored my father called “Lifemart”. I did my best to polish it. But, like my father, I am a writer, not an editor. It’s not perfect, but we did it together. It was my gift to him, one writer to another.

Dad was so proud of the book. I was and remain proud of his creativity. His constant drive to write. To pour his heart out into paper. Most importantly, it became the one thing that truly bound us father-to-son.

We are both writers.

After I said those words, I recited this poem, selected from Lifemart by my sister, Carla Breden.

Beauty of life
Returned
When the sun
Became visible again
Bright light swaths
Of sunlight
Here, there.
On the curb,
The blacktop lot
Cement-paved walk

The moment I said the last word in that poem, "Fly," without warning a great gust of wind rushed past me and into the funeral attendees. The yarmulke on my head went flying away. The carpet that had been placed onto the lawn tossed over in the air. People stumbled from the impact of the powerful gust.

Perhaps it was my father having one last word with us. I would like to think it was him reminding me to embrace my creativity and remember that at heart I am a writer. 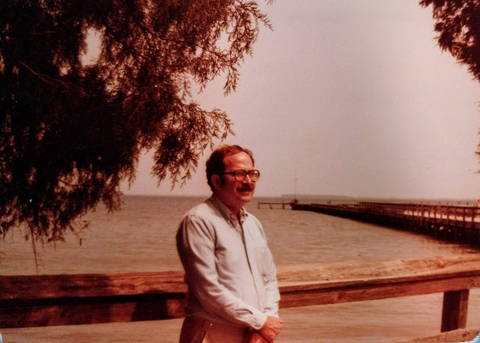 My father loved the beach. I think if employment were close to the sea, he would have moved my family to the shore. In his sixties(?) he lived on Salisbury island in the Chesapeake Bay.

My father was a dreamer. To support the family, he bought a campground, later trading it for an ice cream store. He followed his heart. He was a restless spirit who chased after big dreams. When he grew old and didn't have the energy to run around, his creativity flowed out even more through his pen on paper, through drawings and writing. 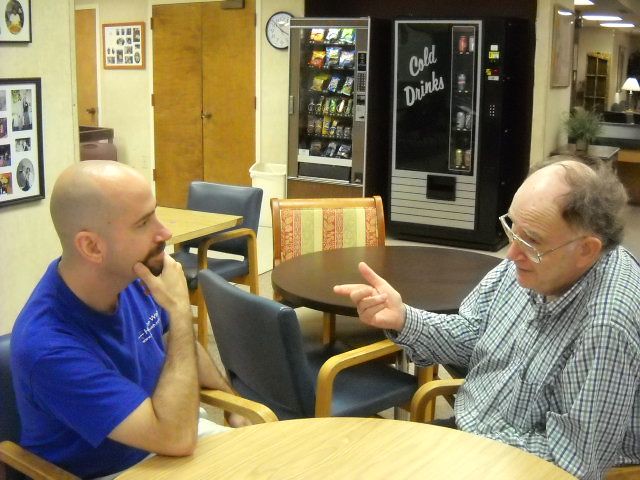 This was taken in 2010, the last time I visited my father when he lived in Washington, DC. He was giving me advice about my big move across the USA to California to be with Audrey. 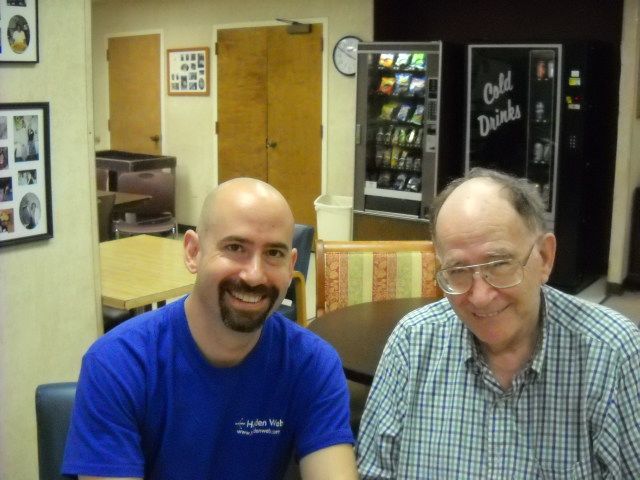 Me and my father.

More photos of Ted Greenfeld. If you want me to include photos of yourself with my father, send the photo and I'll include it here and in that photo album.

Tags: family obituary
← Back to home